When you do BBQ today, please remember why you are free to do so #MEMORIAL_DAY 2016 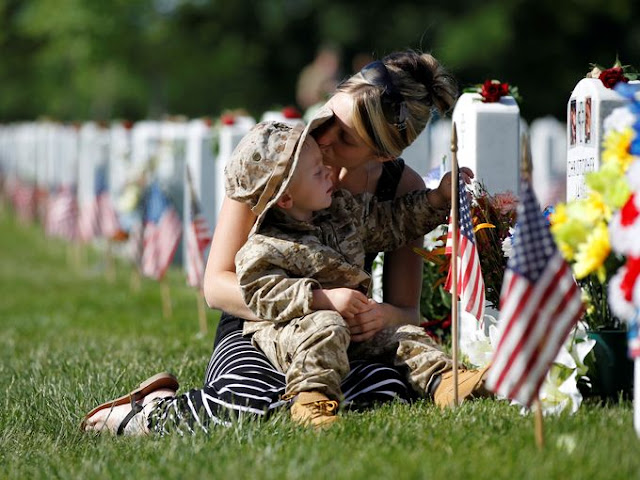 New Jersey State Police had first inaccurately reported that the pilot had been rescued around 9pm and only suffered minor injuries, according to the NYPD.

Witnesses could actually see Gordon struggle as he tried to get out of the plane before it became completely submerged in the water.

‘He was strapped into the seat belt and trying to get out, but there was no hope for him,’ Camara Dodd told WABC.

NYPD and FDNY Harbor units and the Coast Guard remained on the scene at the 79th boat basin on the Upper West Side on Friday night.

The plane, named Jacky’s Revenge, was scheduled to perform at the Jones Beach Airshow this weekend for fleet week.

It was on loan from the American Airpower Museum at Republic Airport on Long Island, spokesman Gary Lewi told NBC New York.

It was flying with at least two other planes, a P-40 fighter aircraft and a photo plane, along the river to take promotional pictures for the show and the museum’s website.

The pilot decided to crash land in the Hudson after experiencing engine failure, Lewi told Newsday.
The plane, which took off from Republic Airport, crashed two miles south of the George Washington Bridge and was closer to the New Jersey side, according to the NYPD.

Divers spotted the pilot in the plane’s cockpit around 9pm.

Officials said the plane reportedly went down around 7.30pm.

One witness attempted to jump into the river to rescue those on board but was pulled from the water, according to the Hackensack Daily Voice.

Witnesses who were eating at Frank’s Waterside Restaurant in North Bergen, New Jersey, told NBC they saw the aircraft fall into the water nose first.

‘The front glass was off and the guy was trying to get out. He just couldn’t get out, the plane kept going down, down, down, just gone.’

The plane was secured to an FDNY vessel and the US Army Corps of Engineers will attempt to lift it from the river on Saturday morning.

A Ukrainian pilot detained in Russia since 2014 has arrived home following a dramatic prisoner swap with Russia.


Ukraine’s president, Petro Poroshenko, said a plane carrying Nadiya Savchenko had landed in Kiev. He went to the airport to meet her. She arrived from Russia in exchange for the release of two Russians held by Ukraine. Poroshenko is due to address the nation shortly. Dozens of journalists gathered at Borispol airport’s terminal B.

Savchenko’s return marks a triumphant moment for Ukraine, where she is viewed as a national hero. It also marks a significant moment of detente between Moscow and Kiev, and a breakthrough in on-off diplomatic negotiations conducted in Minsk.

It comes a few weeks before the European Union decides whether to extend sanctions against Russia, imposed following Vladimir Putin’s annexation of Crimea in 2014 and his covert invasion of eastern Ukraine.

‘I will return home, dead or alive,’ says Ukrainian pilot on trial in Russia

Quoting unnamed sources, Kommersant newspaper reported that the exchange was agreed late on Monday during a telephone conversation between Putin, Poroshenko, Angela Merkel and Francois Hollande.

Russian media said that a special presidential plane sent by Putin had taken off from Kiev to Moscow. On board were Yevgeny Yerofeyev and Alexander Alexandrov. They both told Reuters in interviews last year they were Russian special forces soldiers who were captured while carrying out a secret operation in the rebel-held Donbas region.

The plane arrived back at Moscow’s Vnukovo airport, where the two men were reunited with their wives. Putin “had signed an order to pardon pilot Savchenko”, Russian media reported. The president was quoted as saying that he hoped the prisoner exchange would reduce tensions in the Donbas region.

Earlier Savchenko’s lawyer Mark Feygin confirmed she was on her way home. He wrote on Twitter: “Two years ago I promised Ukrainians I would do everything possible to free Nadiya… I know how to keep my word. She’s heading home, to Ukraine.”

Savchenko, a military pilot, volunteered to fight with a ground unit against pro-Moscow separatists who launched an insurrection in eastern Ukraine against Kiev’s pro-western government.

She was captured and put on trial in southern Russia, charged with complicity in the deaths of Russian journalists who were killed by artillery while covering the conflict.

A Russian court in March sentenced her to 22 years in jail. While in Russian jail, she was elected a member of the Ukrainian parliament. She is widely seen in Ukraine as a symbol of resistance against Russia.

Feygin tweeted on Wednesday that Savchenko wasn’t guilty of any crime. She had nothing to do with the deaths of the two journalists, Igor Kornelyuk and Anton Voloshin, who were working for state TV.

Her release is a boost for Poroshenko, whom critics accuse of failing to tackle Ukraine’s endemic corruption or to confront entrenched oligarchic interests. In April Poroshenko, a multimillionaire businessman, appeared in the Panama Papers in connection with an offshore company registered in the British Virgin Islands.

Opposition activists in Russia hailed the prisoner exchange. Dmitry Gudkov, the lone liberal opposition deputy in Russia’s parliament, argued that if Russia had exchanged Savchenko earlier, Alexandrov’s Ukrainian defense lawyer Yury Grabovsky might not have been murdered near Kiev in March.

“We wouldn’t have embarrassed ourselves before the whole world with the ‘trial’ of a deputy of the Rada and PACE. There wouldn’t have been another split in society over an artificial propaganda story,” Gudkov wrote on Facebook, referring to the fact that Savchenko was elected to the Ukrainian parliament and the Parliamentary Assembly of the Council of Europe during her imprisonment.

“It’s a good thing both sides had enough political will for the exchange. People shouldn’t be hostages,” opposition PARNAS party member Andrei Pivovarov wrote on Twitter.

But not all Russian commentators greeted the reports as warmly. Pro-Kremlin analyst Dmitry Solonnikov told a local news site that Savchenko’s release would lead to a “strengthening of the anti-Russian wave in the EU, first in the media, then in politics.”

Ukrainian politicians were ecstatic with the reports Savchenko had been freed. MP Alyona Shkrum wrote on Twitter that Savchenko’s mother was complaining that she hadn’t had time to cook a pot of borscht for her daughter’s arrival.

An EgyptAir flight from Paris to Cairo has disappeared from radar with 66 people on board, the airline says.

The Airbus A320 went missing over the eastern Mediterranean, soon after entering Egyptian airspace.

EgyptAir says it received a distress signal before the plane disappeared from radar.

There were 56 passengers – including three children – seven crew members and three security personnel on board Flight MS804, the airline said.

Earlier an airport official, quoted by Egypt’s state-run newspaper al-Ahram, said the last contact with the plane had been 10 minutes before it disappeared – and no distress signal had been sent.

But EgyptAir tweeted (in Arabic) that a distress signal was sent from the plane’s emergency devices.

Flightradar24 listed details of the plane’s journey on Wednesday which showed it had flown from Asmara, in Eritrea, to Cairo, then on to Tunis, in Tunisia, before heading, via Cairo, to Paris.

Egyptian Prime Minister Sherif Ismail has arrived at the airport in Cairo, along with the families of those on board, state-run Nile News TV reports.

Aviation analyst Alex Macheras told the BBC that Airbus A320s were regularly used for short-haul budget flights and had “an amazing safety record”.

In March, an EgyptAir plane was hijacked and diverted to Cyprus. The attacker later surrendered and all hostages were released.

Last October, a Russian passenger plane flying from Sharm el-Sheikh crashed over the Sinai peninsula killing all 224 people on board. Officials in Moscow and Egypt later said the aircraft was brought down by an explosive device.

Islamic State militants said they had bombed the plane.

If anyone is concerned about relatives or friends following the disappearance of the flight, they can call this free number provided by EgyptAir: +202 259 89320.

Our thoughts & Prayers are with the passengers, crew and the families of EgyptAir Flight #MS804 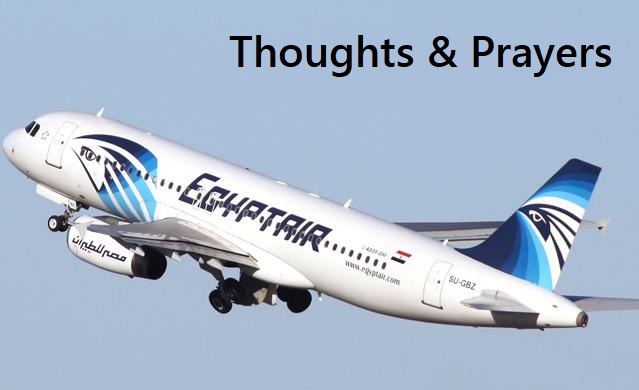 “The Serbian army is trying to obtain modern hi-tech models of weapons and military hardware that will act as a considerable deterrence factor and will be able to give a reliable response if it is necessary to repel an aggression and defend our national interests,” the Serbian minister emphasized.

At the same time, Djordjevic noted that the Serbian army tried to preserve the maximum level of operational and functional capacities of the combat hardware, which it has at its disposal. “A considerable part of models of weapons and military hardware are either made in Russia or [the former] Soviet Union,” Djordjevic said.

“At the moment, we are planning to receive two Mi-17B-5 transport helicopters from Russia. That will contribute to the renovation of a considerable part of the Serbian Air Force fleet and the Serbian army’s Air Defense,” the Serbian defense minister said.

“We want to renovate and improve the Serbian army’s combat equipment. Besides, we want to show that we are a reliable partner in the creation of a regional center for repairing separate models of military hardware. Let’s wait and see if that will produce any concrete results,” Djordjevic concluded.

Her majesty called the US president’s bevy of choppers “over the top”, meaning the Secret Service had to rethink their plans to land about six aircraft in the 300-year-old gardens of her main residence during his tour of the UK this week.

The Queen put her foot down and said there was no chance his extensive security backup would be accompanying him to Windsor Castle.

She said only three helicopters, including the president’s personal aircraft Marine One, could land on the lawn when Mr Obama, 54, and his wife, Michelle, 52, came for dinner with the Queen and Prince Philip to celebrate her 90th birthday.

Her insistence came after the president’s helicopters damaged the grass when half a dozen of them landed during his last visit in 2011.

The engines’ heat scorched the grounds and the wheels left divots in one of the UK’s oldest lawns, planted during the reign of Queen Anne in the early 1700s.

One royal source told the Daily Star Sunday: “It was a write-off and the Queen was not amused.”
An insider said US aides refused to change their plans on security grounds but came around to the Queen’s wishes eventually.

They said: “Various US aides said that wouldn’t be possible.

“The President has a small army of Secret Service agents who follow him all over.
“They said they needed to be within reach of the president at all times.

“They also wanted guards posted inside the dining hall when he had lunch with the Queen.

“But Her Majesty refused to back down and said, ‘three helicopters only’.

“She rarely imposes her will but when she does people listen – it just took the US Secret Service agents a little time to realise that.”

Yesterday, Obama took part in a question and answer session with young people at Westminster’s Royal Horticultural Halls where he thanked the Queen for lunch the previous day and said how “adorable” Prince George was when he went to Kensington Palace for dinner with Prince William, Kate and Prince Harry the evening before.

It came the day after he urged Britain to remain in the European Union (EU), prompting a backlash from British politicians saying he should stay out of it.

Upon the US head of state’s arrival last week, London’s airspace went into lockdown, with all drones and private aircraft banned from flying into the capital while his plane was airborne.
A fleet of US F-22 Raptor combat jets were on standby to shoot down any potential threat.
Obama will head to Germany and Saudi Arabia after his UK visit.